My recent accident was a timely reminder that we really need to make sure we have contingency provisions in place to cope with unforeseen situations. I’m rarely ill (touch wood!), but having a wonky knee as a result of a skiing crash only goes to prove that accidents can (and do) happen to anyone at any time. I was lucky that I haven’t been completely out of action, or at least that I had the remainder of my holiday for the initial recuperation stages. As a colleague commented, I can in theory do lots of translating now I’m not fit for much else, including my twice-daily dog walks. But in practice, is that how it works?

I returned home on Easter Saturday and had the rest of the holiday weekend to sort myself out without trying to do any work proper. My sons were still around those two days, which was helpful in terms of dog walking, but from the Monday afternoon, I was on my own, aided and abetted by my very confused dogs. 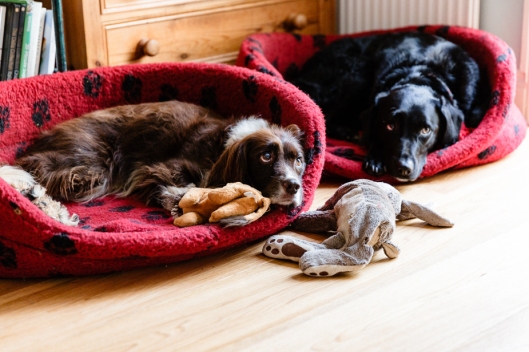 First and foremost, it’s surprising how much time the sheer administration side of a travel insurance claim takes. The number of documents they require as evidence, not all in the right format initially, or some still to be hunted down, is mind-boggling, leading to numerous ‘phone calls and time-consuming searches to try and pin down the right information. To give just one example, they wanted proof of our channel crossing and accommodation booking, showing evidence of all passenger names. My elder son had booked Eurotunnel and the documentation only shows his name, while the advance passenger information you now have to complete before travelling is no longer visible after the date of travel. Despite initially saying they would send me a letter showing passenger names, Eurotunnel were ultimately unable to come up with the information I needed. Likewise the chalet: my younger son had booked it for 9 of us, in his name, and there is no provision (or need!) for showing names of any other guests. It seems to me that the system is geared up to package holidays, not independent travellers. However, my insurers did in the end agree that the information I had would have to suffice; it seems they say they need evidence of names to prove that I was only there for less than the maximum stay abroad allowed on my policy….

Submitting online complaints about my appallingly cavalier treatment on the homeward journey was also extremely time-consuming, but did eventually reap rewards in the shape of apologies, promises to pass on feedback to the relevant parties, and compensation – always worth making your views known in such cases. Further time and energy was expended cancelling future events I’m going to be unable to attend, including the BP2018 Conference in Vienna this week. I managed to get my flight refunded in the form of a voucher because, as luck would have it, the airline had already changed my flight time by nearly 5 hours. The conference organiser also kindly refunded my fee less a small administration fee, all of which saved yet another insurance claim. Thank goodness I hadn’t booked to fly to Chicago for my future daughter-in-law’s bridal shower this weekend too!

Arranging and attending medical appointments also requires time out, especially if you have to consider getting lifts to appointments. If you live in a town or city, taxis are a viable proposition, but out in the sticks they aren’t quite as available and most of my local friends were either working or on Easter holidays in the daytime. I did, however, discover an amazing community service operated by my village church, called the Social Action Project, where volunteers operate an informal taxi service on a rota basis, transporting patients to doctors’ or hospital appointments in the local area. Such a good idea – and I for one shall be looking to volunteer and give something back once I’m restored to full fitness.

Despite getting an initial doctor’s appointment very quickly on the Tuesday after the holiday weekend, the earliest hospital appointment I was offered was for this coming Wednesday (over three weeks after my accident!), with no mention of an MRI scan at all yet. Taking matters into my own hands, I booked a private physio appointment last Friday, and was told I could discard the immobilising leg brace and start doing a series of leg-strengthening exercises three times a day. I’m so glad I did: I think my muscles would have seized up completely had I kept the brace on until the hospital appointment as the GPs had suggested. Instead, after the initial stiffness, I really can feel my knee getting stronger day by day. And, best of all, I can drive, helped by the fact that I have an automatic car. For an independent soul, not being able to get out of the house under my own steam was driving me mad!

I think the NHS is a great institution, but in this case paying for alternative treatment was very much the right option for me. Private healthcare is prohibitively expensive for freelancers: an article in the Sunday Times yesterday suggested average premiums in my local area of £98 a month, no doubt much more once you’re the wrong side of 50… I’ve always taken the view that it’s something I can’t justify taking out and I’m still inclined to that approach. BUT if I can help myself by paying for physiotherapy, acupuncture or herbal medicine in the meantime, I’m happy to do that, although well aware that this may not be an option for many less fortunate than me.

Losing the leg brace has made a huge difference to working positions too. During my first week home I really struggled to find a comfortable position to work. I have a large corner desk in my office upstairs, but even with a stool and cushion under the desk, it still wasn’t particularly comfortable for my outstretched leg to sit and work there for any length of time. I’ve used two monitors for many years and working downstairs with the laptop meant using just one screen – not ideal. In the end, I compromised by doing some things where I really needed two screens in the office, but plugged my trusty Samson Meteor desktop microphone into my laptop on a lap tray and dictated from the comfort of the sofa with both feet up on a padded footstool most of the time. Much better – and perfect for editing / proof-reading too. Not the first time I’ve been grateful for Dragon speech recognition either! Fortunately, most of the jobs I was working that first week didn’t require me to have reference documents up on the second screen, but last week I was constantly cross-referencing and very relieved to be able to bend my knee and work in my usual set-up. 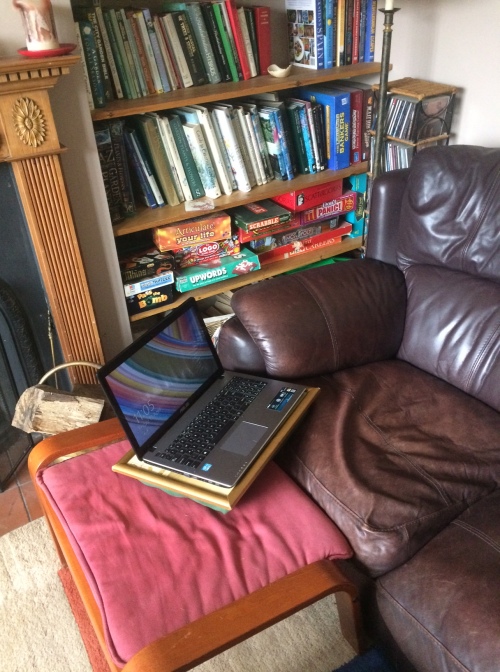 Having alternative working arrangements is definitely something we should consider just in case life takes a turn for the worse. I used OneDrive so that I could access TMs and termbases from both my desktop and my laptop, and I already have Trados set up on both machines, so it was a relatively seamless transition.

Another lesson I’ve learned for future reference is not to bite off more than I can chew. I blithely assumed that I’d still be able to work at my usual pace, but the medical appointments, ‘phone calls, mountains of admin, stream of (very welcome) visitors to walk the dogs for me, and pure logistics meant that I actually achieved very little workwise in my first week back. I’d accepted a 30K-word job from a regular client for three weeks’ hence; eminently doable under normal circumstances, but I was heartily relieved when it actually turned out to be only 21K in the end. Note to self: don’t overestimate your abilities in times of stress, especially if convalescing isn’t something you’ve had much experience of…

Online shopping has been a huge boon, as have my lovely friends, who have been uncomplainingly walking my dogs and doing errands for me. I was so glad I had a freezer full of pre-prepared soups and casseroles, so I didn’t need to worry about cooking initially either. I’m back into the cooking swing now, indeed it’s good to stand and flex my leg from time to time, but in the early days, it was all very tiring.

One last point, which really hasn’t applied this time, but could so easily be an issue in a more serious accident, is to make sure that you always have 3-6 months’ income set aside for just such a rainy day, as I noted in my post on financial planning a number of years ago. I have been lucky that I’ve been able to carry on working, with a few minor adjustments, but had I hit my head (thank goodness for helmets!), it might have been a very different story. You can, of course, take out income protection cover if you are self-employed, but this can be hugely expensive and often doesn’t pay out for several months in any event. Building a cash reserve as a means of self-insurance is a very viable alternative, even in these days of rock-bottom interest rates, especially if you also need to pay for help in the house or garden, or to fund private medical appointments.

Hopefully I’m on the mend now, although I don’t think I’ll be back to tennis or dance, or heavy-duty gardening for that matter, for a while yet! A salutary lesson that none of us are immune from health scares – but do we have structures in place to enable us to carry on with our lives when it all goes pear-shaped?