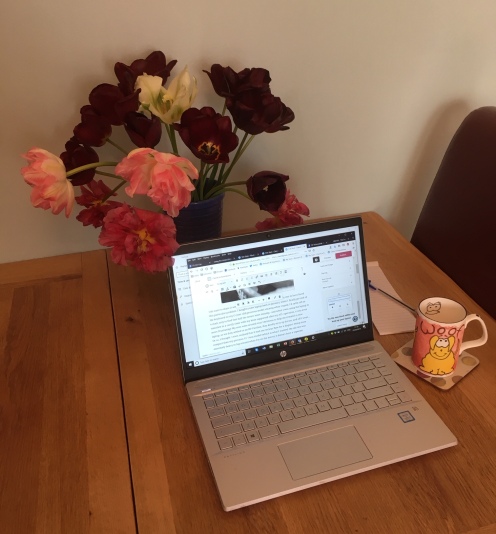 I’ve been meaning to write this post for some time, but have been overtaken by work, holidays and events, not least the birth of my baby granddaughter just over a week ago: a very special time, which certainly puts work into perspective.

I do want to share this post with you, though, as I’m sure I can’t be the only one to have faced this particular problem. I bought a new laptop back in January, when I finally got sick of the keyboard on my (5 year-old) previous model sticking when I typed. I’d rattle off an e-mail, only to find that half the letters were missing – and when I was using the laptop to translate in a comfy chair with my knee supported after my ACL operation, it was even more frustrating! My sons were around over Christmas to help me research a new laptop, so we duly settled on an HP Pavilion, they kindly set it up for me, and off I went…. Or so, I thought. I soon realised that it had one serious flaw for a linguist: being more compact than my previous 15″ Asus model (which is what I wanted: the old one was extremely heavy to lug around when I’m on the move), it doesn’t have a separate number pad. Which in turn means that the memorised ALT codes I use to type accented characters no longer work, as they depend on the numbers on the number pad.

So what to do? Sure, when translating in a CAT tool, you can conceivably copy words with accented characters from the source, but it doesn’t solve the problem of typing e-mails to clients abroad, when you inevitably need accents. Believe me, I did a fair amount of research into the problem and nothing obvious jumped out – are we linguists in such a minority, I wonder? One fix is to open the character map available in Windows 10 and have it open in the background as you work – but searching for, copying and pasting the relevant character is a very long-winded way of working. Colleagues suggested switching to a French or German keyboard, but that presumes that you know where the characters are on the foreign keyboards – and given that I last worked in France or Germany in the early 80’s, pre-computer era, on a golfball typewriter, I have very little recollection of using a foreign keyboard, so would need to start from scratch – likewise not a viable solution. Then I had the brainwave of ordering a separate number pad, only to find that they don’t have an ALT key and don’t “talk” to the ALT key on the integral keyboard, so no joy with ALT codes that way either. Back it went. In desperation, I was considering ordering a separate keyboard, although that really defeats the object of having a compact laptop if you have to carry a separate keyboard whenever you travel!

On iPhones, iPads and Macs of course, they get round this problem rather neatly by the ability to hold down the letter keys to see all the accented characters available, which you can then select. I’d almost come to the conclusion that I’d have to use my iPhone/iPad to respond to e-mails when working remotely, and the character map/copying from source when translating – hardly ideal, but it was too late at that stage to return the laptop on the grounds of this missing functionality.

However, based on the assumption that I couldn’t possibly be the only translator / multilingual person to have faced this conundrum, I thought I’d have one last-ditch attempt and send my query off to one of the excellent Facebook support groups for translators: Technophile Translators. This group is ideal for technically challenged translators like me to post technical and IT-related queries of all kinds, not just on specific CAT tools. I received lots of helpful suggestions on my post, some involving the use of macros (striking terror into my heart!), AutoHotKey (likewise – I’m told it’s very simple, but it doesn’t sound it – much watch Richard Lackey’s Tech tools for low-stress linguists webinar on the ITI site, free for members to download), or programs called Freecompose or Holdkey (http://www.holdkey.eu/). However the one that took my fancy was a relatively simple solution – and works a treat: switching to the International Keyboard layout on Windows. This suggestion came from Steven Marzuola, who has written a very helpful post on the subject here.

It’s very easy to install: on Windows 10, simply click on Settings > Time & Language > Region & Language. If you don’t already have US English installed, you might need to add US English at this point. Then click on US English > Options > Add keyboard, then add the US international keyboard. You could choose to make this your default, but beware that this reverses the @ and ” keys and doesn’t have the £ sign, so I prefer to leave the UK keyboard as my default, but switch to the US International keyboard whenever I need to type in French or German. This is also extremely easy: just press the Windows key and spacebar and you can toggle through the various keyboards you have installed; if you look at the bottom right-hand corner of the screen, you’ll see the keyboard you’re using. Mine currently says ENG for UK English, but if I press the Windows key and spacebar, I can opt for ENG INTL, FRA or DEU, based on the keyboards I have installed. Alt + shift key also works, as you may have inadvertently discovered when working – I’ve done this many a time and panicked when pressing ” brought up @ or vice versa!

Having set the international keyboard, typing the accented characters is very simple. Just type the dead accent key ” ` ‘ ^ or ~ followed by the letter you want to be accented, e.g. e for ë, a for à,  u for ü, e for é. Nothing happens at first until you press one of the related characters, which can seem a bit unnerving. To type the other letters shown in blue, press Alt Gr followed by the relevant key, plus Shift if necessary for the character you want, e.g. °, ß, ç, µ. I currently have the sheet printed out for ease of reference, but you could equally have it open online if you’re on the move. However, I imagine you soon get used to the most common characters you need, and it’s certainly no more difficult than remembering Alt codes! If you need to type one of the dead accent characters on its own, remember to put a space after it if it’s followed immediately by one of the vowels it moderates. The quotes or apostrophe are the ones that might cause most problems to an English speaker, but you can avoid the problem by switching back to the standard UK English keyboard when typing in English.

This is a relatively simple fix for a problem I was really struggling with: I really don’t understand why Microsoft don’t make it easier to find! Thanks again to Steven for pointing me in the right direction – and hoping this post helps others who have been equally frustrated!