A rainy day and a European public holiday have finally coincided to give me time to write up my thoughts on this year’s excellent ITI Conference in Sheffield just one month ago. A combination of a jam-packed workload, grandmotherly duties, a minor op and a very busy time of year in the garden/allotment have conspired against me until now.

So here goes: as the conference bag reminded us, this was the sixth in the recent conference series and I’m happy to say that I’ve attended each and everyone one, from London in 2009, through Birmingham, Gatwick, Newcastle and Cardiff – each one getting bigger and better every time. The venue this time was the magnificent Cutler’s Hall in the heart of Sheffield – not a city I’ve ever visited before, despite living not too far away on the other side of the Peak District in the late 80s/early 90s. A delight to be up North again, of course, with that inimitable Northern friendliness, even if it did feel bitterly cold when I changed trains in Doncaster – I’m clearly becoming a nesh Southerner after all my years in the South….

This year’s conference certainly didn’t buck the trend, with a stellar collection of speakers, no less than 375 delegates and a fascinating range of topics on the agenda. There was an impressive four-track programme this year, including a dedicated interpreting track – which also made it very hard to choose who you wanted to listen to at any one time, with the inevitable clashes. I can’t hope to record every last detail of all the presentations I heard, but I hope I can offer just a distillation of the main messages on offer, cherry-picked from some of my favourite talks.

My first session on the Friday started with an interesting presentation by Andy Way from Dublin City University on the role of the translator in the AI age, confirming that, although huge progress has been made in this field, there is still a long way to go. The big players (Google, Microsoft et al) have a tendency to make overblown claims when they say they have achieved human parity. But of course, we already knew that. This is still a concern, though, as the man in the street is liable to take these claims as gospel and believe everything they read, whether or not it’s been translated correctly. (Case in point: my cousin, who lives in Canada, but is currently renting a house in France on a long-term let, recently posted on Facebook about the Anguille (sic) du Midi, translating it as the Midday Needle. Glossing over the eel vs. needle issue (you can’t be too picky with non-linguist family members!), I pointed out that actually the Midi here referred to the region in France, not to midday. “But that’s what Google said,” he replied, “so it must be right.” Sigh.) This is an issue that most certainly isn’t going to go away anytime soon – and it was good to hear about it from an expert in the field.

Next up for me, still in the imposing main hall, was a fascinating talk by David Jemielity entitled “The Other Side of the Mirror”. David works in-house for a major Swiss bank and explained how he and his team had pushed hard to get the translator’s voice heard in corporate marketing campaigns. Very few translators work in-house nowadays, of course, but the lessons he described were equally relevant for those of us who work freelance. We should always be questioning the purpose of our work and how effective it is as a piece of communication:

A salutary lesson. There’s no point producing a polished piece of prose if it doesn’t have the desired effect with the target audience. And while as freelancers, it may be more difficult for us to influence the end client, even if we work with direct clients, we need to keep on trying to get the message across. Ask questions. Make comments. Suggest (ever so politely) that something might not work quite as well in the target language. Add value. And don’t give up, even if your suggestions are rejected first time round!

Chris Durban’s talks are always a must-see for me, even if she’s banging the drum for translators to extend themselves and get out of their comfort zone, as she so often is – it’s clearly a message that bears telling and retelling, especially in Chris’s extremely entertaining style. This time, the focus was on Making the Leap – for translators who have got past the starting post, but are coasting as they’ve reached the middle ground and don’t know how to take that next step….

Her key point was that making the leap is synonymous with a greater awareness of risk at the premium end of the market. However, higher risk is compensated by higher rewards, not only in the financial sense, but also in terms of intellectual satisfaction and customer appreciation. If a job’s worth doing…. She concluded with ten bullet points to be embraced by would-be leapers: beware that comfort zone (see map – courtesy of the brilliant Gemma Correll for Evernote), develop deep specialisms (non-negotiable!), embrace risk, eschew PEMT (hear, hear!), limit your time on social media (it’s not the be all and end all), invest in yourself (that all-important CPD); don’t believe everything people tell you (think for yourself!), get a mentor, try and avoid wistful references to the Golden Age (Monty Python’s crisp packet on the M6 sketch comes to mind…) and don’t think that technology will solve everything – it won’t, especially at the top end of the market.

Saturday’s keynote speaker was Oliver Kamm, Times columnist and son of legendary Asterix translator Anthea Bell, who died last year. He offered us a fascinating insight into what it was like to be a child in the household of such a luminary in the world of translation, along with an intriguing tour along the byways of grammar, and a sense of reverence for the importance of languages as a means of combating xenophobia and nationalism in the dark times we’re currently experiencing.

Karen Tkaczyk concluded the final day’s proceedings with a slightly different slant. As she commented herself, she often talks about technical writing or technical translation per se, but in line with the conference’s theme “Beyond the core – forging the future of the profession”, this time she turned her gaze to alternative ways of showcasing yourself. She suggested simple, yet effective tips like writing recommendations for colleagues on LinkedIn, giving referrals, naming the translators of your own website, and asking clients to provide testimonials for your website. She also broached the notion of a Pinterest page, which might seem novel for a professional whose business is words, but in this image-driven age, it’s certainly worth a try. Creating a portfolio is another option, although obviously we need to be careful about confidentiality. One last tip was to google yourself – you might be surprised where you come up….

As ever, the conference isn’t just about the main event, important though that is: there’s a whole series of fringe events and secondary gatherings, some organised by the committee, others by individual networks and regional groups. Networking is a key part of the proceedings, so important for us in our often isolated profession. Conferences are a great way of renewing acquaintances with colleagues, meeting new people and generally grounding ourselves in the real world of people, not just computer screens and the written word for once.

As a new board member AND a new Fellow of the ITI, it sometimes felt as though my feet barely touched the ground, such a social whirl was laid on. From the Fellows’ tea on Thursday afternoon, closely followed by the Meet the Board session in the Leopold Hotel, then on to the Welcome Reception at the funky Bungalows & Bears bar. This was a converted fire station, filled to capacity by our large crowd of translators and interpreters, and later wowed by a great jazz band, although that did make the conversation a little difficult; perhaps it’s just my age?! I somehow managed to miss the food altogether – too busy chatting! From there, some of the German Network attendees moved on to a Cuban tapas bar for an extremely convivial meal with yet more live music and gargantuan portions of tapas. Friday saw the Gala Dinner in the evening after a full-on day of presentations, and opportunities to dance the night away to the excellent band after the meal and ITI Awards ceremony. I was very surprised – and honoured – to be invited up on stage to accept a pin for services to ITI from outgoing chair Sarah Bawa-Mason. 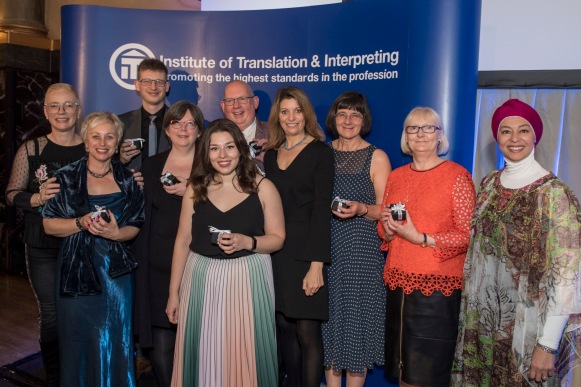 Saturday morning kicked off bright and early with a brunch organised by the German Network, ostensibly for those who couldn’t make the dinner. In actual fact many people attended both – and it was actually much easier to chat and network in the quieter and less frenetic early morning atmosphere of the Blue Moon café just opposite the venue. So good to put names to faces from the e-groups and other online forums, as with my final social event of the conference proper, the Foodie Translators’ gathering. Following on from our get-together in Cardiff back in 2017, we once again invited colleagues from the Foodie Translators’ Facebook group (and others) to join us at the  Blend Kitchen, an excellent community initiative that seeks to use food and cooking to improve lives. We started off at the quirky Elm Wine Bar for some excellent wine and nibbles, then moved on to Blend for a highly enjoyable meal – rounding off the conference in style.

The conference team had also laid on a range of fringe events including an all-too-brief but relaxing yoga session after Friday’s programme, the now mandatory and tear-jerking Singing Translators’ production, a conference run for those that way inclined, and a saké class on both Friday and Saturday lunchtimes, which was very different, but no less enjoyable for all that! You could also have a professional photograph taken, as at previous conferences. I missed out on the guided tour of Sheffield on the Thursday afternoon due to other commitments, and sadly had to decline the prospect of the Peak District walk on Sunday morning, as I wasn’t sure my recovering knee (post-Christmas ACL op) would be up to a strenuous walk on rough terrain. As it was, a small group of us drove over to Lea Gardens near Matlock and wandered around the beautiful rhododendron garden, an old haunt of mine from my days on the Cheshire fringes of the Peak District – and just as beautiful as ever, if not more so. Thanks to Angelika and her husband for being our appointed chauffeurs. 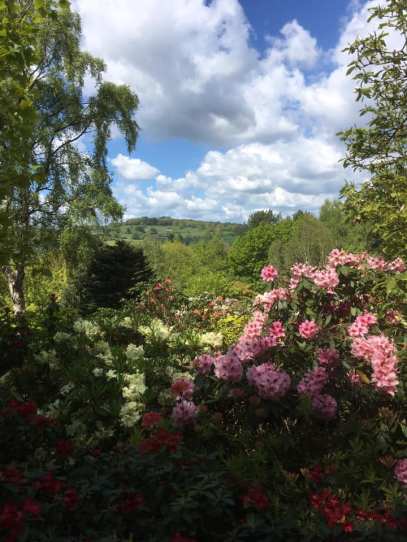 All in all, an epic and thoroughly enjoyable conference – superbly organised by the ITI conference team, and particularly Anne de Freyman, who put together a wonderful programme for our delectation. There’s no doubt in my mind that these events rekindle our enthusiasm for our profession – as well as being educational, inspiring and motivational. They introduce us to new sources of information, work, support and ideas – and may even lead us in a completely new direction. If you’ve never been, I can only say that you’ve missed a trick. They’re worth their weight in gold. 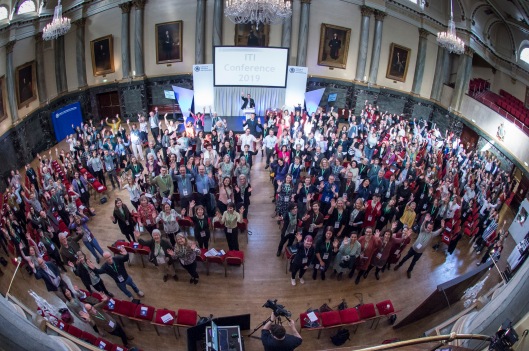 Thanks to the ITI official photographer for some of the shots I’ve used and to Angelika Welt-Mooney for the picture at the welcome reception.

10 thoughts on “Spotlight on Sheffield”