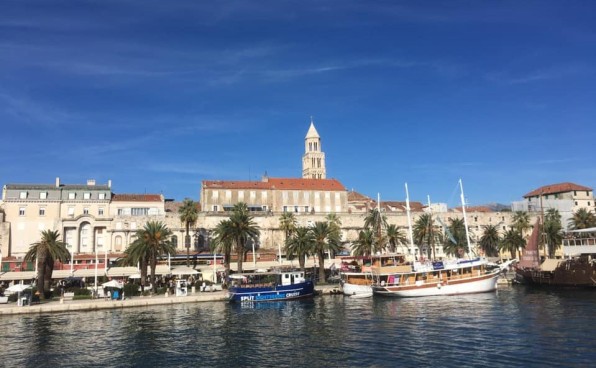 I may be a seasoned conference-goer, but I’d never managed to attend a MET (Mediterranean Editors and Translators) event until a few weeks ago. I’ve been tempted on a number of occasions, drawn by the fabulous locations and glowing accounts published by colleagues and friends, but the annual gatherings always seemed to clash with other events or family commitments. Finally, this year the stars aligned for me and despite a family holiday in the US a couple of weeks before, I signed up for the METM conference in Split at the end of September.

Where to begin? MET is an association of English language editors and translators, many of whom are based in or around the Mediterranean. This does not mean, as I wrongly believed for many years, that the association is limited to people translating into or out of Mediterranean languages, although it was originally set up by a couple of translators on the Iberian Peninsula. While there were many native English speakers at the event, often now living and working in Italy and Spain, there were also representatives from many other countries, including decidedly non-Mediterranean countries like Finland, Germany or the Netherlands. My languages are French and German, so I needn’t have felt a fraud, but the actual languages aren’t the point. It seems to me that the association was initially focused on academic practices and editing – which is great: so many translation conferences and CPD events neglect the forgotten, but essential art of editing. In recent years, however, and in line with members’ and conference attendees’ demands, they have started to include more corporate topics too, resulting in a very interesting and well-balanced programme for translators/editors in any field.

But first things first: the venue. Each year the annual conference moves to a different (and usually stunning) location in the Mediterranean area. This year it was the turn of Split in Croatia, a country I’ve never visited. All the more reason to be tempted… Split turned out to be a delight: I knew very little about it before I went, but it transpires that it is built around the site of Diocletian’s Palace, the retirement home of the Roman Emperor Diocletian and one of the best-preserved Roman monuments in the world, dating back to 3AD. One of the first formal conference events was a guided tour laid on by the organisers.  You forget how rewarding guided tours can be until you have an excellent one, as in this case: despite covering a huge chunk of history, our guide managed to bring the whole scene to life with lots of fascinating snippets of information: why all (bar one) of the Egyptian sphinxes had their faces removed (by the conquering Christians), that caper plants grow on the walls – who knew that’s what they look like? – and that the reason the basement levels are so well preserved is that for years they were used as a waste repository and only excavated relatively recently. She also gave us great pointers for places to explore during the rest of our stay and set the stage for a most enjoyable stay in this beautiful town. 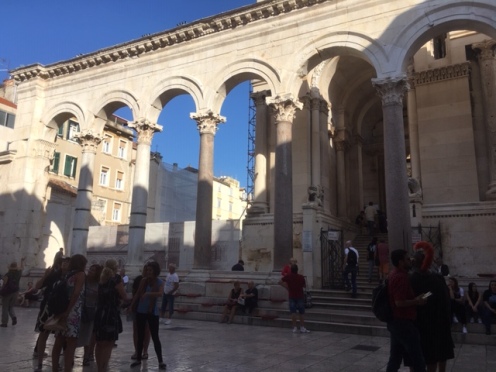 Networking is one of the most important aspects of any conference and this one was no exception. In my case, it even started at Gatwick Airport, where I met up with four ITI colleagues travelling out on the same ‘plane. MET prides itself on its ‘Off-METM’ activities including welcome drinks on the first evening for newcomers and old hands to get to know each other, dinners with a range of often unusual discussion themes (Game of Thrones (I have to confess I’ve never watched it, but apparently it was filmed in this area!), sibling rivalry or animal magic anyone?!) and lunches along the same lines. You can opt in or out as you like, but always best to get in early for the most popular dinner sessions: Croatian Cuisine and Wines of Croatia booked up extremely quickly! Equally, there’s nothing to stop you joining forces with one or more like-minded individuals for lunch, as I did after the guided tour on the first day. 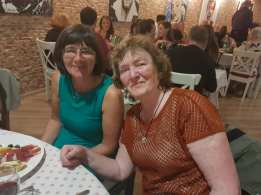 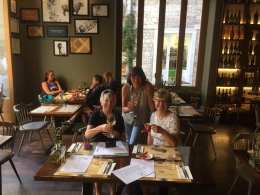 Following in the tradition of previous conferences, I’d also organised a Foodie Translators‘ dinner on the Friday evening, which brought together 13 colleagues from the Facebook group of the same name for a delightfully convivial evening at Dvor, a lovely restaurant right on the seafront – although of course it was dark, so we couldn’t appreciate the views. Food, wine and company were all excellent, though – and a joy as always to meet up with colleagues you’ve only ever met online. Then there’s the added delight of finding yourselves discussing topics you only ever broach with fellow linguists in post-prandial conversations in the early hours of the morning over a glass of Croatian liqueur: who knew that Croatian had 7 cases (including the instrumental case, no less!), and is it ever really possible to sound like a native speaker in your source language, no matter how many years you’ve lived there, if you only move over there as an adult? 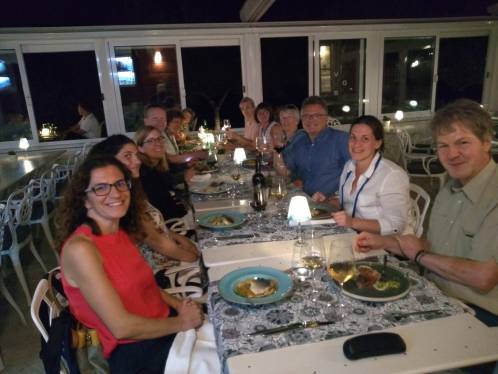 As ever, food plays a huge part in these trips, certainly for me as a passionate cook, and Split definitely didn’t disappoint as a foodie venue. Croatian wine was quite a revelation too, especially the smooth but powerful Dingac made from the local Plavac Mali grapes. The Italian influence in Split was clear to see from the ice cream: I discovered the enchanting Gelateria Emiliana where I sampled peach & rose, and lemon & lavender during my brief time there. I would certainly have regarded it as my duty to sample their entire repertoire had I been there for longer… well worth the 4.9 rating on Google reviews. 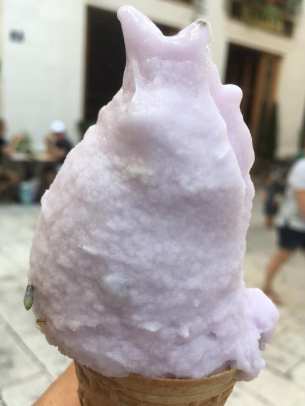 The food on offer at the conference itself was excellent – there were delicious canapés at the opening reception on Friday evening, and the lunch on Saturday was a magnificent buffet spread, with the local speciality garlic flatbread stuffed with Swiss chard (which seems to be the favourite vegetable in Croatia!), colourful fresh salads and vegetables, plus a whole range of main dishes to choose from, even with a dainty dessert selection. What I also love about Mediterranean conferences is that they always serve wine with lunch – it was a Saturday after all! Each coffee break had plentiful quantities of beautifully presented fresh fruit on offer – perfect for an event in a hot and sunny location.

The conference also has its own scratch choir – I’m not sure which came first, the ITI conference choir or the MET choir, but for those who love to sing, this is clearly a huge and bonding experience at these events. I definitely don’t sing (rejection from my junior school choir has scarred me for life, fair though the decision undoubtedly was), but I love to hear the end result on the closing day. Yoga was also on offer, a wonderfully relaxing session with qualified instructor Francesca Matteoda after Friday’s presentations. Plus there were language breakout groups inspired by similar sessions organised by our own German and Spanish Networks at ITI conferences.

I’m aware that I haven’t touched on the conference proper yet, but that will have to wait for Part 2 of this post. My aim in the first instance was to offer a flavour of a METM event from the newbie’s perspective – and I hope I’ve succeeded in setting the scene. MET as an organisation has some 400+ members, whereas a larger national institute like the ITI has over 3000. Hardly surprising that their annual conferences have a different vibe. With 150 attendees, the METM event has a more intimate feel, perhaps less daunting for newbie conference goers? As for me, new to METM I may have been, but I knew so many colleagues from the ITI, the conference circuit and social media that it felt like a home from home.

The emphasis on the Off-METM events is great for first-time attendees as it offers huge scope for getting to know colleagues in a more informal setting. The spread-out nature of the event, with (optional) workshops on the first afternoon and the second morning, then the formal conference itself starting at 3pm on the second day, also offers plenty of scope for networking, or even exploring in my case! Having opted for Ruth Simpson’s excellent wine workshop on Thursday afternoon (of which more next time), I found that none of the following day’s workshops appealed, and nor did the first two parallel panel presentations (on translating for philanthropic causes or the humanities) on Friday afternoon. Feeling ever so slightly guilty for playing hooky, I took myself by bus and boat off to UNESCO world heritage site Trogir, just up the coast, on a colleague’s recommendation (thanks, Martin – excellent call!), getting back just in time for Friday’s excellent keynote speech. It would be a shame to visit somewhere so beautiful without making the most of it, after all. 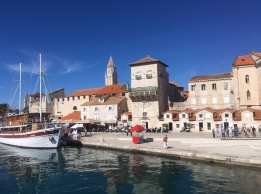 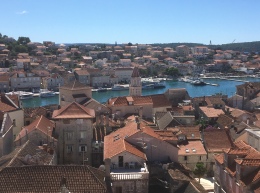 Tiny niggles: a slight downside of the “split” (see what I did there?!) venue, with the conference using two different sites on the university campus, some 30 minutes’ walk out of the town centre, was that there was a lot of trekking between locations. I’d opted to stay in an Airbnb apartment close to the venue, whereas others had chosen hotels or rooms in the old town. Hard to say which was best, especially as the workshops/presentations switched between the Faculty of Humanities and the Faculty of Medicine – just 10 minutes or so apart, but with a major road and an underpass in between, it wasn’t obvious to find the way. Some brightly coloured waymarkers or balloons would have been a great help. There were buses from the centre to the university, but many of us opting for taxis to get back to our hotels after evening events felt we were ripped off by the local cabbies, who seemed to hear a foreign voice and double the price! Using Uber resolved the problem and is precisely why that system works.

Delightful though the conference catering was, I also felt the lack of somewhere to sit/stand and eat during lunch on the Friday. They did have some of those standing tables, as I’ve seen at previous conferences, but too few, so you inevitably end up trying to balance a plate, a glass, cutlery and your handbag/conference bag – aagh! I was also trying to have an informal meeting with colleagues over one break and it was extremely hard to find somewhere where we could sit and talk, let alone balance our lunches! Plea for more seating/standing/balancing options next time, organisers…. 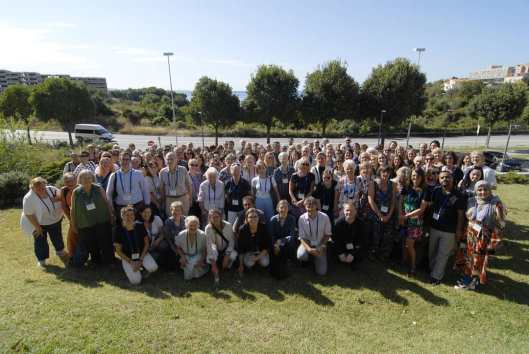 All in all, I thoroughly enjoyed my first METM conference and wouldn’t hesitate to recommend it to others, especially conference virgins. The very nature of our job means that freelance translators often spend a lot of time working in isolation. These kinds of events are just what we need to get us down from our garrets and into the real world, talking to colleagues and making connections: vital if we are to progress in our careers. Since getting back from Split, I’ve discussed a potential shared job with a colleague I met at the event, added lots of new connections on LinkedIn and other social media, and, with my ITI Board and PDC hat on, agreed to meet regularly (if virtually) with colleagues from MET, SENSE and NEaT to discuss cooperation on future CPD. Conferences are all about who you meet and the relationships you make in the process – can you afford to miss out? 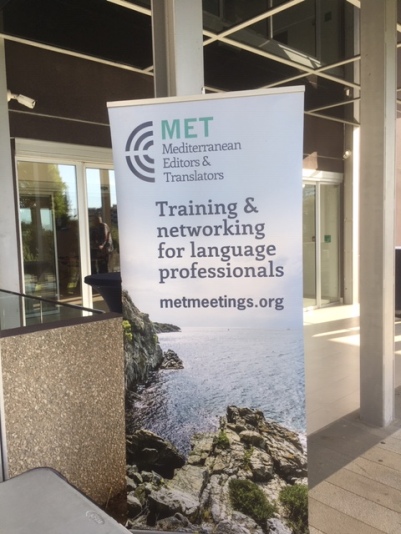 Credit for the official group photograph to MET and their official photographer, Mario Javorčić. Thanks to Dana Szabados for some of the food pictures – I’m far too good at eating and only belatedly remembering that I’d intended to take a picture… Thanks too to Ruth Simpson for the choir video – it seems I inadvertently posted one from the wrong year first 😦

22 thoughts on “A METM newbie’s take on Split”