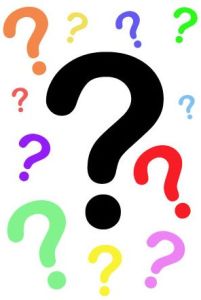 It’s a familiar story: you’ve come to the end of a lengthy translation and there are a couple of points you’re not quite sure about. It might be in-house jargon, or indecipherable acronyms. Or then again the source text might not be very well written, or there may be ambiguities you need to resolve in order to convey the meaning accurately in your target language. So do you get back to the client and ask for clarification? Or just hope for the best and go with your instincts….?

I’m firmly in the “ask” camp myself. I don’t believe any agency or direct client worth their salt would think you any less professional for seeking clarification. Indeed, not asking is much more likely to leave you open to accusations of unprofessionalism! There may be any number of reasons why a source text might not be entirely clear: the author may have left a word or phrase out; there may be a typing or dictation error, the text may have been left deliberately ambiguous, but conveying that ambiguity in the target text might not be quite as straightforward…. You might just not have a enough context to go on to make an informed decision. Add these to the list of considerations I mentioned above and you’ll see that if you’re in any doubt about the true meaning of your source text, it really is best to ask.

I clearly recall Chris Durban, in her mystery shopper presentation at the ITI Conference in Birmingham in 2011, describing her experiences with outsourcing work to translators. She too was amazed how few translators bothered to ask questions, but she was actually far more concerned if translators DIDN’T ask! I only outsource a limited amount of work these days, but I feel the same way. I always try and make it quite clear that I’m happy to answer any queries, no matter how trivial. It shows me that the translator is thinking about what they’re translating and keen to get it spot on.

I tend to leave it until the end of my first draft before sending in my queries, but with a very long document, it might be a good idea to split the text into sections and send batches of queries after each section. I’m currently working on a very lengthy translation and sent my first list of questions when I reached the quarter mark, over a week ago. Unfortunately, I’m still waiting, despite gently nudging the agency a couple of times in the interim! This is frustrating as not only am I perpetuating any misunderstandings I might be making, but the longer it takes, the more potential adjustments I’ll have to make at the end, rather than after a shorter section, as I’d hoped. Many of my queries relate to acronyms, not to their meaning as such, but how the client would like them conveyed in the target file. In the particular field I’m working in, some of my clients like to use the equivalent English acronym, some prefer the French left as it is and others prefer the French followed by the English equivalent in square brackets afterwards – as you can see, it’s a potential minefield! This particular end client made it very clear at the outset of this project that they were happy to field questions and that the priority was for accuracy, yet I suspect project managers at the client’s end have changed in the meantime and I have on occasions been asked to highlight any queries when I return my final translation – never a satisfactory outcome for the translator!

I often find that working for direct clients leads to more successful question-answer sessions, as you are able to go straight to the horse’s mouth. I love it when you query a term and the client ‘phones or e-mails you back saying they’ve just spoken to the engineers and giving you a detailed description of what the widget in question actually does – brilliant! Then again, direct clients may not speak the source language at all, but merely discussing the issue with them shows them that you’re aware there’s a problem and if nothing else you can add a translator’s note with possible options. I translate an ongoing series of minutes and actions for one particular client and it’s gratifying to find, further down the line, that a particular piece of text that I’ve queried has been amended in the source text as not being sufficiently clear there either….

I have worked for clients in the past who have clearly been unwilling to “bother” the end client and have just said “Oh, put what you think….” – which I hate! Providing you’ve done the necessary research, using standard dictionaries in your subject field and a decent amount of online searching, it is most certainly not a sign of weakness or ignorance to check your understanding of a specific term or phrase. Patents in particular, with their very long and convoluted sentences, are often riddled with typing errors and omissions and I frequently send them back with a list of queries based on my assumptions. With patents, you are often asked not to correct errors in the text, but to note them separately for consideration by the patent attorney. Another agency client sends me two-column Word documents extracted from Déjà Vu with an extra Comments column, and I use this to note any niggles I might have about the text as I work, for easy reference by my agency contact at the end. Translator’s notes (footnotes or endnotes) are another option, but I’d rather avoid these unless specifically asked to use them as I feel it breaks the flow of the text.

Of course, there are lots of things you can do before resorting to sending that list of queries to the client: checking dictionaries, on and off-line and carrying out web searches. I find Linguee extremely useful these days, as it shows you words used in context – you have to be able to sort the wheat from the chaff, obviously, but it can give you a nod in the right direction. Translation forums are also very valuable resources: professional associations such as the ITI have language and subject networks, often with associated e-groups, where you can post term queries for discussion by qualified translator colleagues. I find these particularly helpful for getting a native speaker’s take on a particular phrasing, less so for highly technical terms, but it’s always worth a try if you’re really stuck. Finally, I have a number of colleagues I can refer to in extremis, either by Skype messaging, e-mail or ‘phone: it’s amazing how often the act of writing down your concerns helps crystallise the problem in your mind! And if it doesn’t, two minds are better than one and, between you, you can arrive at a solution. It may be that you’re still not sure, even after all that, so that’s when you need to consult the client.

Often, if you’re unsure about something, but persuade yourself that you’ve instinctively worked it out, that will be the one term that will come back and bite you – in the form of a proofreader’s red pen, or at worst an angry reaction from the client. It just isn’t worth taking the risk – even if you have to badger the client to respond in the first place! At least that way, you’ve raised awareness, asked the question and tried to reach a solution. If you still don’t get an answer, you may have to reiterate your concerns when you send in your final text, but the ball is in the client’s court, unsatisfactory as that may be for you as a perfectionist translator…

So, yes: ask, ask, ask every time is the answer to my question – not to the extent that you make a nuisance of yourself, but so that you show yourself to be the diligent, professional translator we all aspire to be. 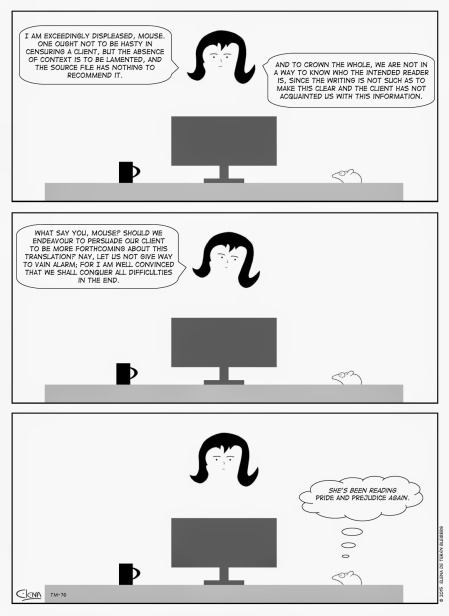 With grateful thanks to www.tina-and-mouse.com for the very apt cartoon!